Choose the appropriate model year for the Ford Flex you are trying to find the towing capacity for from the list below. 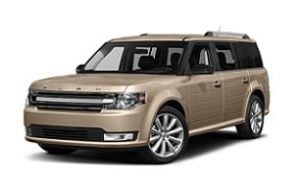 You can find 65 different trims/engines for the Ford Flex and their corresponding recommended towing capacity.

The years available stretch from 2009 through to 2019 and to view the towing capacity you just click to expand.

The Flex is a full-size crossover SUV that Ford manufactured for 10 years between 2009 and 2012. During its time on the market, there was only one generation released. However, this model did receive a facelift in 2013.

One of the most interesting aspects of this model is the clear styling cues from the Range Rover - a model of the Land Rover brand that was controlled by the American motoring giant at this time.

It features the standard 5-door SUV layout. It is also considered a mix between an MPV and a station wagon. Like many other crossover SUVs, it also came with either front-wheel or all-wheel drive depending on the trim level selected.

Due to the model being a mix of classes, it faced competition from various other models, without ever having a true rivalry. It was often compared to the larger Ford Expedition, as well as the Chevrolet Traverse, Toyota Highlander, and Hyundai Palisade.

The release of the Flex resulted in lower sales figures than expected, selling much less than these competitors.

Trim levels consisted of the base SE, followed by the mid-tier SEL, and finally the Limited which represents the top of the line. Both the SEL and Limited versions were given the option of FWD or AWD.

Ford later added the Titanium trim. This represented a blacked-out version of the Limited trim level. This trim made it look even more similar to the Range Rover.

Ford outfitted the Flex with only two petrol options. The first engine was a naturally-aspirated 3.5-liter Duratec V6, the other was a twin-turbocharged EcoBoost V6 found in the all-wheel drive option. This was also a 3.5-liter powertrain.

These were mated with only two different 6-speed automatics, depending on the trim level.

The Ford Flex was discontinued due to low sales numbers and to make way for a host of prospective hybrid and fully-electric models likely to be introduced to their lineup in the near future.