Choose the appropriate model year for the Ford Fusion you are trying to find the towing capacity for from the list below. 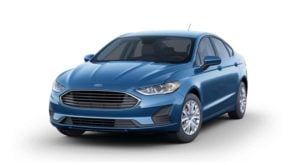 You can find 87 different trims/engines for the Ford Fusion and their corresponding recommended towing capacity.

The years available stretch from 2006 through to 2020 and to view the towing capacity you just click to expand.

The Fusion is a European vehicle created by Ford Europe between the years 2002 and 2012. There was only one generation spanning the decade with a few facelift changes along the way. The Fusion was part of the B-Segment and carried up to 5 passengers with characteristically large windows and tall head height. The Fusion shares a platform with the Ford Fiesta supermin. Marketed as an ‘Urban Activity Vehicle,’ the name ‘Fusion’ represents the combination of SUV, MPV and a small hatchback (each with traits borrowed to create the Fusion). There was no all-wheel drive variant for this vehicle.

The Fusion was first showcased at the Geneva Auto Show in 2001, and almost exactly a year later, the car went on sale after its official launch in 2002. Manufactured at the Cologne Niehl Assembly Plant, Ford exported the vehicle to 50 countries worldwide including Angola, South Africa, Singapore, New Zealand, Japan and Hong Kong.

There was a facelift in 2005 which saw changes to the front and rear lights, soft-touch interior materials, bumper fascias and door mirrors. Elsewhere, the Fusion was marketed as the crossover SUV EcoSport with revised styling and increased ground clearance. It scored 4 stars when tested by NCAP.