Choose the appropriate model year for the Ford Fiesta you are trying to find the towing capacity for from the list below. 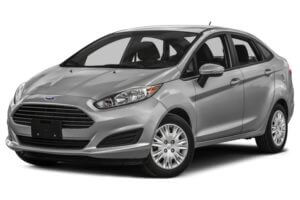 You can find 145 different trims/engines for the Ford Fiesta and their corresponding recommended towing capacity.

The Fiesta is a supermini built by Ford dating back to 1976 predominantly for sale in the European market. In terms of size, it sat just below the Escort and as of 2008 was sold worldwide.

The first generation of Fiestas were created by Ford's Bobcat Team and approved by Henry Ford II following the Fiat 127 and Renault 5. Due to the oil crisis in 1973, fuel-efficient cars became extremely popular and this had aided in sales.

The vehicles were originally manufactured in the newly installed Ford factory in Valencia, Spain and assembled in the UK Plant in Dagenham. The second generation, dubbed the Mark II in 1983, featured a facelift and had the new ‘Continuously Variable Transmission’ (something shared with the Fiat Uno), there were three models, the Popular, Popular Plus, L, Ghia, 1.4S and XR2.

Despite fierce competition in the UK from VW Polo, Fiat Uno, Nissan Micra, Peugeot 205, Toyota Starlet and the Vauxhall Nova, the Fiesta remained a firm favourite and in 1987 alone 150,000 were sold.

The third generation corrected the only main problem with its predecessor and added two extra doors. The 1995 Mark IV was the British best-selling car between 1996 – 1998 and was only overtaken by the Ford Focus (a newer model brought to market). New Zetec engines were introduced, to include 1.25-liter and the 1.4-liter. The 1.8-liter turbodiesel engine saw some modification and refinement.

The fifth-generation (named the Mark VI, given that the fourth generation’s facelift was so different it was dubbed the Mark V) entermeted the market in 2002. The trim levels here were Finesse, LX, Zetec and Ghia. Ford showcased the new concept car at the Frankfurt Auto Show and marketed it to Europe, Australia and USA. The 2013 facelift saw the addition of Ford's new corporate front end. The 2017 generation was generally a larger car, with more room for passengers and cargo, was more efficient and brought forward the very first crossover the ‘Fiesta Active.’